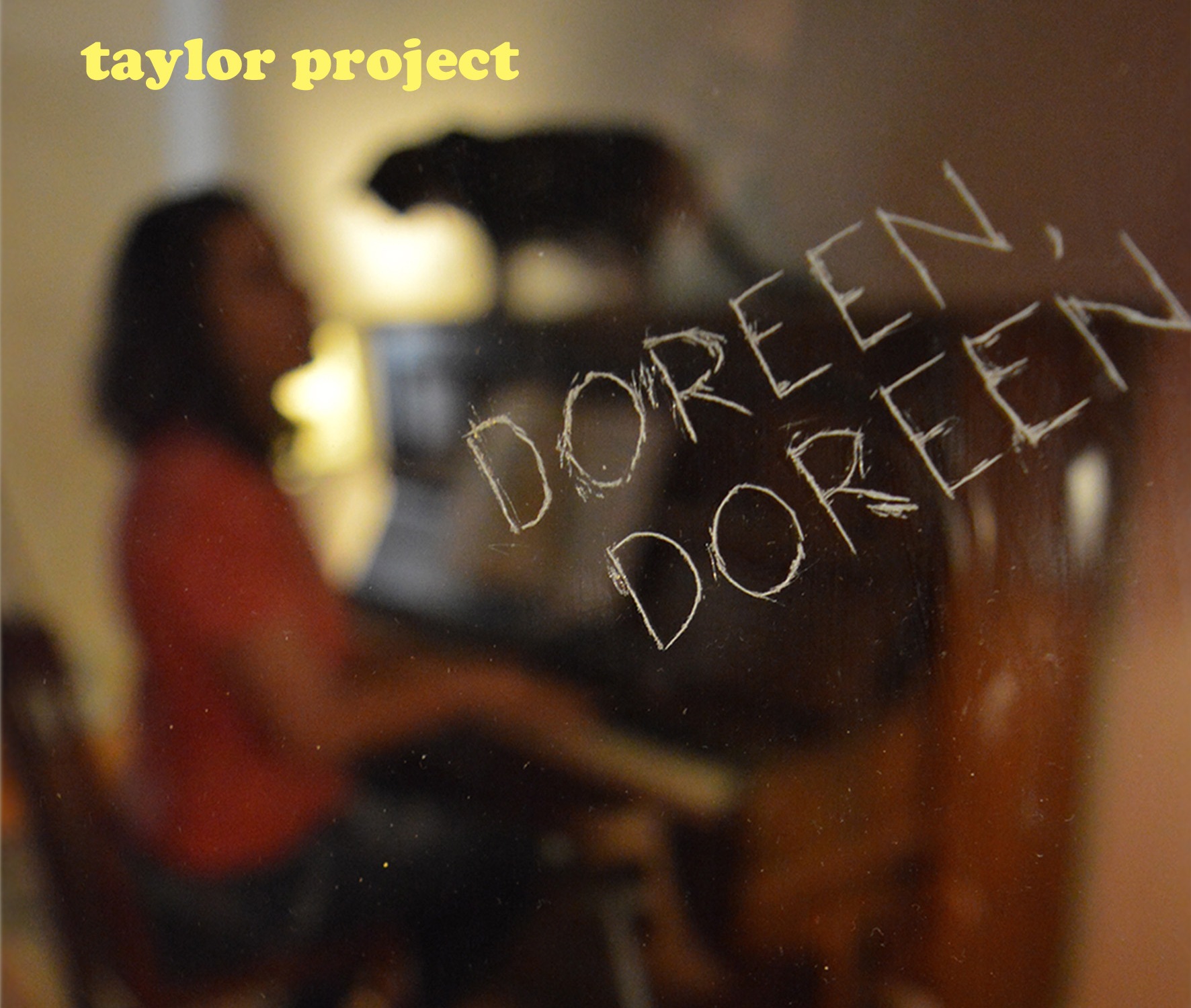 All True Men: Oscar Wallace and the Outrage at Mount Beckworth

Read about some of Liz’s research into this case, which originated with the ‘Convict Paradise’ songwriting collaboration in 2012.

Joe’s Farm Gate in May.

Find all Taylor Project albums at our bandcamp / website here:

The sounds on Doreen, Doreen range across country and folk, Nashville-esque ballads, comical acoustic numbers, and experimental mashups. On the first three tracks, the muffled piano ballad and mellow trumpet of Cool Change give way to the colonial folk rock of Guilty Wretch, and then to the washing machines, op shop organs, and sampled 1990s cassette tapes for job seekers of Detroit.

The lyrics are distinctive: at times informative, other times evocative of times and places that the writers (Liz and Sarah) have spent time thinking about. As with preceding Taylor Project albums, geography is often a central character: from rust belt Detroit, to the post war irrigation schemes of Shepparton (The Orchard), a jail cell in the 19th century New Zealand gold fields (Guilty Wretch), and suburban amphetamine labs (Doreen). There is also a fascination with nature: not Nice Nature, but Nature in its cycles and its indignities: “the obscenity of spring / pollen is just semen” (Waiting on a Fool).

The songs conjure optimism and decay, youth and aging, power and powerlessness. In their resignation they give an almost affirmative vision of intimidating forces – like economics, love, or violence – as inevitable cycles that shape and remake individuals, with neither malice nor sympathy: “there’s fixed rate or there’s varied rate / or there’s just a kick in the head” (Doreen), “In the bar tonight is the unbending instinct / which is not concerned with dignity” (Detroit).

The cover art to Doreen, Doreen shows a beloved old piano and even more beloved old cat in Elmore, northern Victoria, where six of the songs were recorded. The other five songs were recorded in – where else?! – Doreen, in the new northern suburbs of Melbourne. The inset photos feature Melbourne Airport’s fantastically huge car park at sunset. After the photos, the band and their shovel soon got moved on (politely, but with little fanfare) by airport security.

The forensic lyrics of Doreen, Doreen and other Taylor Project albums can be partly attributed to day jobs. Liz has a PhD in urban planning, and spends her days writing research on car parking, giant chicken farms, and alcohol regulations. Sarah works with databases and is writing a PhD on the historical geography of live music. She spends her time writing code, reading about bands who have long since broken up, and making maps about the effects of labour casualisation.

Andrew works night shifts at a newspaper printing factory, and quite enjoys it because he can spend his days with a synthesizer and a deaf cat. Scott drives a community service bus, plays in several bands (but not the Creedence Clearwater tribute band anymore) and has a superhuman knowledge of 1960s and 1970s music history. Jason is an artist, bureaucrat, caustic wit and Geelong Cats fan.

What puff can be said about Taylor Project? In the absence of a label, awards or reviews (good or bad), writing these things feels like that scene in the Simpsons where Marg is making up a convincing resume (“homemaker: 1980 to present”). It’s a strange thing to write when a band is long running but, by most objective measures, not particularly successful. Just as Marg had some help from Lisa, it is often easier to describe yourself through the eyes of others. Here are some comments and factoids about Taylor Project drawn from other people’s reactions:

About the Songs on Doreen, Doreen

Waking up on a morning in Melbourne, with construction noises and restless piles of leaves on the street.

A simple ballad recorded live around the old piano in Elmore. Voice, acoustic guitar and trumpet float over the muffled room. The Taylor Project YouTube channel has a film clip for this song, featuring the futuristic yet grotesque “mini me” figures of Sarah and Liz made at Office Works.

Nelson, New Zealand, 1866, as multiple murderer and olden days scumbag Richard Burgess awaits execution for the Maungatapu murders. Based on the (mis)adventures described in his confessional memoirs Guilty Wretch that I am. Richard’s main goal in his last days seems to have been to blame everyone else where possible, and justify the rest.

A colonial folk rock tune built around jangling guitar and military drums. The storytelling verses give way to choruses with staccato metering: “those jury men / they’ve just been told, different laws / than my own”.

“We will all be unemployed / we are all Detroit”

Rust belt Detroit, and post-industrial Manchester. The lyrics refer to Robert Kuttner’s 2013 article, “We are all Detroit”, which noted that “Detroit is partly the victim of economic trends far beyond its control”. As are we all…

Slow soundscape built around a washing machine sample (Simpson top loader), 1974 Hammond Sounder from Brotherhood of St Laurence, MPC 500 sequencer, a trumpet, and some cassette tapes from the early 1990s giving advice to immigrants on how to find non-existent jobs (“That’s it! Tomorrow I’m going down to the CES…”)

“Those taxis and sirens were calling in the night again”

Memories of being young, waiting for someone stupid enough to go out with you. Everything charged with anticipation. One of several Taylor Project songs referring to silos – here a reference to a memorable night in Fargo, North Dakota.

The abandoned orchards of SPC Ardmona, near Shepparton, being pulled out and burned when they were no longer profitable. The concept of food trees being considered non-profitable is 21st century economics, but the song also harks back to the Menzies era, when irrigation channels promised prosperity.

A dark gospel folk song, with violin. The chorus lyrics (“spare that tree”) are borrowed from a 19th century proto-environmentalist folk song.

“Remove all suspicion by waving on occasion”

The newly developing outer suburb of Doreen, Melbourne, in the wake of an amphetamine related murder. A real one – Liz read about it in the news. The neighbours hadn’t suspected anything because the guy had sometimes waved and said hello. Police “would like to talk to two men driving a white ute” (don’t they always?) Alas, crime can be in many places, even in new suburban estates named after the heroine in C.J Dennis’ classic Australian poem, The Songs of the Sentimental Bloke.

A quiet street on a Northern English mill town in the late 1960s, with eyes behind parted curtains watching a girl’s every move. A place more hostile, to some people, than the face of the moon being broadcast on TV.

The end of the second world war, celebrating in the streets. The name and lyrical references come from Grahame Green’s novel, as the embittered character mourns the end of the war because it also means the end of a love affair.

9. SITTING ON A TRAIN

“See this country in the dark / the trees like body parts”

An overnight XPT train from Sydney to Melbourne, watching the familiar dryness of the Victorian landscape come into view. There’s a film clip for this song on the Taylor Project YouTube channel.

The magical fairy land where women aren’t being blamed for anything and everything, including the actions of others. A satirical song of gender politics, violence, and absurd logic, which would almost be funny if it weren’t heard every day.

Anywhere where poor people leave the countryside and arrive in a new city, and write music about it. The most famous example: Memphis. But a theme seen over and over in the history of music.

Baltic flavoured waltz (Watch out for the screaming at the end though). 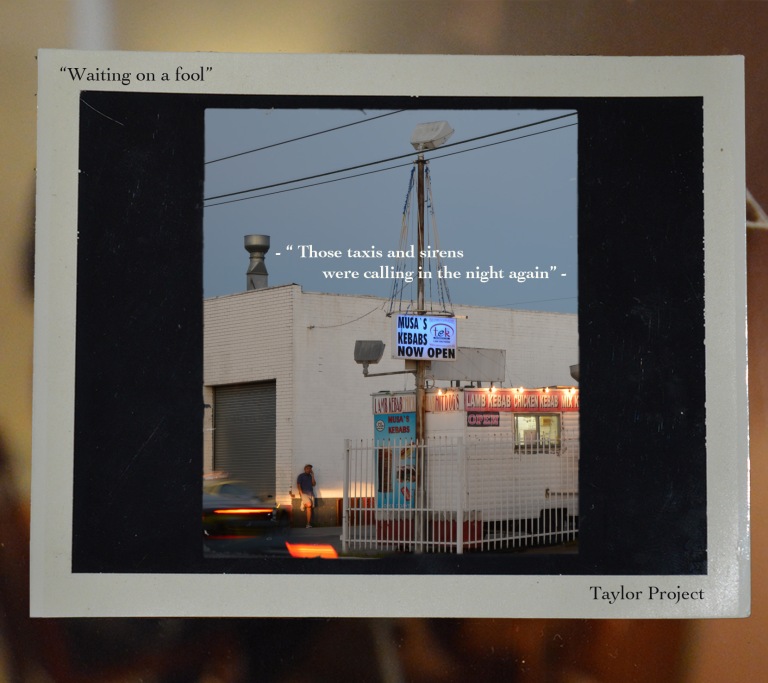